In early 2018, I became the first-ever product manager for the suite of 100+ WooCommerce extensions that are made and maintained by Automattic (the company that owns WooCommerce).

To shape a future for this catalog of extensions, I started by digging into the data. Collaborating with the designers that joined our fledgling extensions team, we spoke with the support team, analyzed purchase behavior, and looked through the Ideas Board, where customers request features.

Even with this research, we didn’t feel we had a clear, data-driven, wide-angle view on the landscape we were trying to serve, so I ran WooCommerce’s first-ever Customer Survey. Building on that data source, I worked with the data team to create the organization’s first customer profiles using a cluster analysis to find related traits.

Here’s the full post about what we found, over on the WooCommerce blog.

This year has been an exciting time for WooCommerce: we opened the Marketplace to new submissions, we launched our first Gutenberg blocks and we’ve started engaging in new ways with the WooCommerce community.

We’ve also had a lot going on behind the scenes, including our first-ever Customer Survey, which has given us new insights on who we’re serving, and a new initiative to reimagine the design of WooCommerce from top-to-bottom.

I joined Todd Wilkens, Head of WooCommerce, and Kelly Hoffman, Director of WooCommerce Design, to share more about the past, present and future of our platform for WooSesh, the online conference focused entirely on WooCommerce.

You can see the full video here, but you need a membership.

Here’s me speaking with Patrick Rauland leading up to the event:

I’ve been location-independent for more than four years.

When I left my desk job, I was looking for a role that supported my development as a full person. I deeply value getting new perspectives by putting myself in someone else’s shoes, so I wanted a role that let me be in different locations.

I found that at Automattic, one of the world’s largest distributed companies.

For just over a year, I’ve been taking advantage of this to the fullest by splitting my time between Austin and Berlin. This year, I’ve been to eight countries and spent more than a third of my time away from “home” (Austin).

Beyond getting to be in different places myself, working in a distributed company means my coworkers are distributed as well. On a daily basis, I’m talking to folks in New Zealand, Poland, South Africa and San Francisco. I get the pleasure of hearing diverse perspectives in a way that I wouldn’t have access to otherwise.

Just a few of the tidbits I’ve learned:

Tortuga Backpacks is another fully-distributed company, and I recently spoke with Jennifer Sutherland-Miller from their team about my experience as a digital nomad. Read all about it.

In 2017, the WooCommerce Marketplace had been closed for more than a year. In that time, our team wasn’t accepting any new products for sale on the platform’s official marketplace, yet we were gathering more and more data about what customers wanted and seeing where developers had a chance to serve those needs.

As we started to think about re-opening the Marketplace, I analyzed our first-party data to define what we wanted to see launch. I presented that analysis at WooConf 2017, and via the WooCommerce blog.

In the past year, while remodeling my house, I’ve spent approximately 80 percent of my time and 140 percent of my patience dealing with a home improvement store. As one example of this journey, when I called to check the status on my windows order, I was told they weren’t sure where in the US it was.

During the two week process of locating the order, I had to call and re-explain the situation to nearly everyone in the windows department. I even tweeted their corporate office, who told me to email them, and they then provided incorrect information via email. The process convinced me that this business truly did not care about my experience with their brand.

But the truth is that it’s not really the company’s fault. Here’s how information and data would have had to flow for me to get the experience I wanted:

Customers expectations about how companies will treat them are ever higher, while companies struggle to get their technology to meet those expectations. Here’s my full post about this over on the WooCommerce blog.

There are many, many, many lists of conversion optimization best practices. Some are sacrosanct:

These practices often come from broad trends observed over many experiments and they highlight what usually and typically works. Often, they’re tapping into a kernel of  persuasion wisdom.

But there’s a problem: just because it usually and typically works, doesn’t mean it’ll work for you. Websites have different target audiences, different marketing, positioning, pricing, product selection, seasonality. Your industry may be atypical.

I recently wrote about eight times that conversion optimization gospel failed to deliver and why for ConversionXL, read the full post.

Confirmation emails may be the least developed customer touchpoint. These standard, expected emails are often as delightful as your typical in-store receipt (read: not at all delightful).

Still, confirmation emails come at critical stages in the customer lifecycle and are triggered by the user, meaning you have fresh, relevant data on your customer that you can act on. 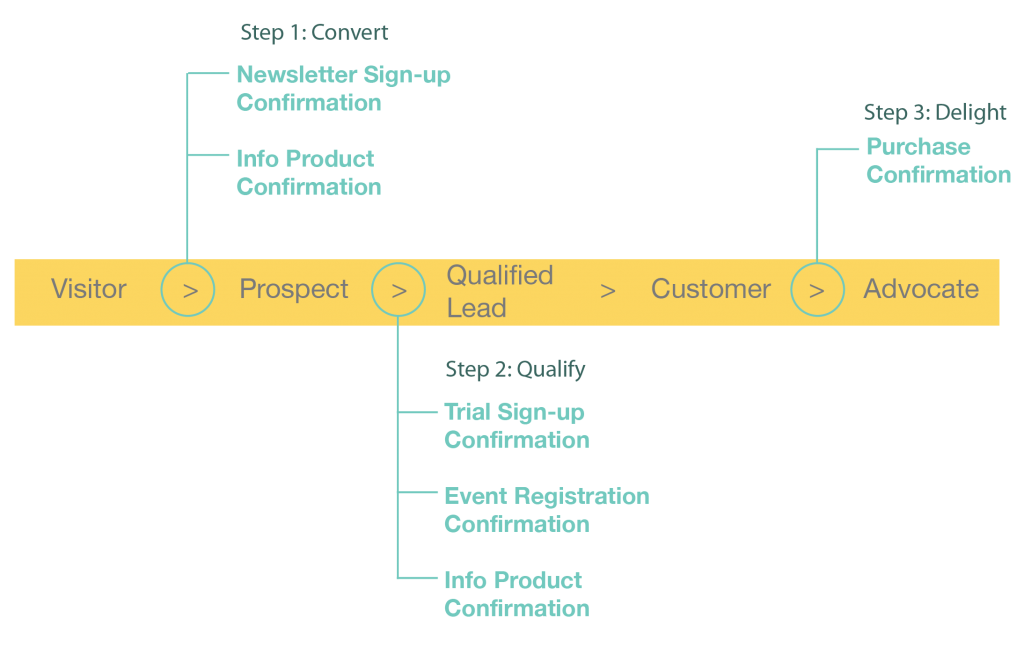 I recently wrote about this for ConversionXL, read the full post.