Volunteering is a social activity where every person with a shovel is a person with a shovel. With this in mind, we though UWATX’s large-scale citywide volunteer days would be excellent opportunities to share photos – so we figured out how to incentivize the effort.

Take the social nature of volunteering from the offline world to the online one by incentivizing individuals to share photos.

The hashtag saw great growth in the first couple of events and continued a positive trend, but it requires consistent maintenance to continue moving forward. What makes the most significant difference in how much a hashtag is used by participants is the visibility of the event dashboard at events.

Still, it has gained enough use that volunteers have started to use it year-round.

If you use a hashtag, it will end up on Instagram: Given the small staff size, UWATX does not maintain a presence on Instagram – but the visual nature of volunteer events and the prevalence of hashtags on that platform mean that users are sharing the hashtag on the platform. UWATX needs to consider how that will play a factor into future decisions about what platforms to use or how it could engage with users during these bi-annual events. Partners: Real-time dashboard on UWATX site – FeedMagnet

At UWATX, the main fundraising vehicle is Employee Giving Campaigns, which rely on fundraisers attending in-person staff meetings to pitch why  donors should give back and why UWATX is the best option. With the rise of smartphones, our fundraisers had a problem: people were on their phones and not paying attention to the pitch.

Create a second screen experience for fundraisers to use in meetings when donors are on their smartphones.

Leverage existing high-value content and extend it to a mobile experience through a mobile version of the Impact Calculator. Allow donors to take easily action by filling out a form and receiving an email reminder to donate. 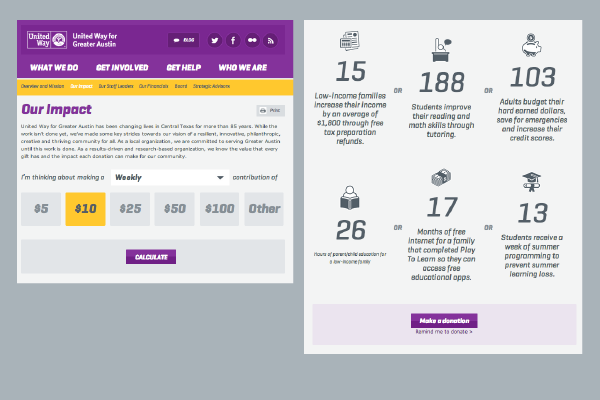 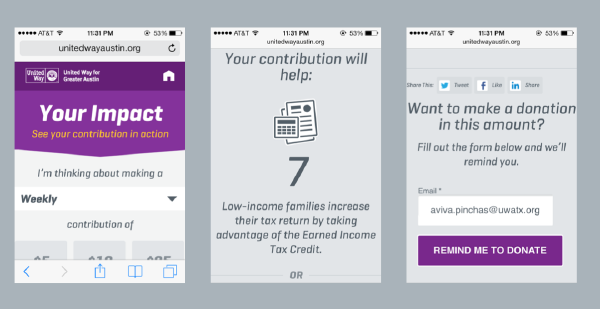 The new Impact Calculator generated 1000 views from Jan. to June 2014, a 57 percent increase over previous year, showing widespread adoption in meetings. This included approx. 25 percent mobile views, a 5x increase over previous year. To date, approx. 10 other United Ways have requested further information to duplicate the Impact Calculator for their own communities.

While the Impact Calculator did increase engagement, it did not successfully drive individuals to fill out the form and take action. Future iterations should focus on improve the conversion rate of the tool.

To recognize the 90th anniversary of United Way for Greater Austin (UWATX), UWATX wanted to create an online experience to draw in new audiences and delight existing ones.

I came up with the concept of a responsive timeline highlighting UWATX and Austin history, including filtered views targeted to niche audiences, oversaw design and development, researched and wrote 200+ highlights and promoted it extensively across all channels (social media, social advertising, e-mail).

During the initial 90-day campaign, the timeline drove an additional 10 percent of traffic to our website above our normal traffic. Of this traffic, 72 percent of this traffic came from new visitors versus site average of 67 percent. Users also average twice as much time on the site when visiting the timeline.

To take advantage of the trendy listicle format for UWATX’s 90th Anniversary, I developed, oversaw the research and writing and managed social promotions for a “10 Lists of 9” blog series published during the 90-day campaign. Among other results, the series drew 450+ visits from Twitter alone in two days.

Two years ago, UWATX’s main method of online donors communications was a monthly newsletter with 5,000 subscribers and had a .3% CTR. To revitalize the effort, I redesigned the newsletter and began blogging regularly (two posts per week). This year, I created a 90th anniversary themed version of the newsletter for the 90-day celebration and also updated to a responsive template.

In just a few years, the newsletter has grown from a .3% CTR to an average 1.5% CTR and grown our audience to 15,000 email addresses (up from 5,000).
The newsletter also drives approx. 26x as much traffic to the main UWATX site as it did three years ago.

UWATX fundraisers often attend staff meetings with our 400+ company partners for their Employee Giving Campaigns, the most significant source of revenue for UWATX. The team wanted a way to engage employees who were distracted by their cell phones during meetings.

I chose to leverage our successful mobile calculator, which we initially developed when I led the relaunch of our website. The new, mobile optimized experience featured enhanced graphics and more donation options.

The new Impact Calculator generated 1000 views from Jan. to June 2014, a 57 percent increase over previous year, showing widespread adoption in meetings. This included approx. 25 percent mobile views, a 5x increase over previous year. To date, approx. 10 other United Ways have requested further information to duplicate the Impact Calculator for their own communities.

UWATX wanted to thank donors in a new way. I came up with a Facebook and Twitter campaign to increase visibility for the appreciation and drive further engagement. These posts saw two to ten times as many engagements as others during the same timeframe.